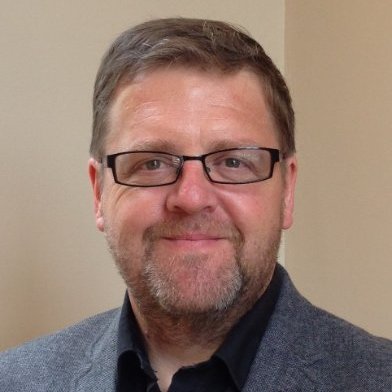 Andy obtained his BSc (Hons) in Applied Chemistry from the University of Aston in 1990 and received his PhD (Chemistry) from the same institution in 1995.

Andy joined Medway School of Pharmacy as a Senior Lecturer in Chemistry in September 2009, serving on the Academic Council of the University of Greenwich (2011-2014). Within the School, Andy has had a number of roles, including Head of Examinations & Assessments (2011-2016) and Director of Undergraduate Studies (2015-2016). From 2014 -2017, he established and acted as Programme Leader for the Foundation/Bachelor Degree in Applied Chemical Sciences for Laboratory Scientist, a distance/blended learning programme forming part of the University’s Degree and Higher Apprenticeships programmes.

Since January 2017, Andy has been Acting Head of the School’s Chemistry & Drug Delivery section and is the School’s Director of Innovation since August 2018.

Andy’s research focusses on polymer and materials chemistry, with emphasis on the application of these materials. He is the author of>40 high quality research publications (>1800 citations, h-index = 23 [Scopus]), along with reviews and contributions to a number of books. He is also named as an inventor on nine granted patents.

Externally, Andy is a board member of the Society for Molecular Imprinting, co-organiser of the GSSMIP series of early career researcher conferences and a Visiting Professor at the University of Toulon, France (2017 & 2019).

Molecularly imprinted polymers (MIPs) are an example of template-synthesised materials, which differ from this general class in that removal of the template leaves behind cavities that are complementary to the template in terms of size, shape and functionality. This field can be viewed as a marriage of supramolecular and polymer chemistry. MIPs have been proposed for use in many application areas, e.g. selective separations, sensing, drug discovery, targeted drug delivery and enzyme-like catalysis. Andy is currently working on the design and synthesis of novel functional and cross-linking monomers, together with the fabrication of nanoscale materials for use in medical diagnostics.

Continuing the supramolecular chemistry theme, Andy is also researching into the design and synthesis of low molecular weight gelators. These are compounds whose self-assembly leads to the formation of fibrils that induce solvent gelation. He is particularly interested in compounds able to gel water at low concentration to form hydrogels, which have potential application in the pharmaceutical, biomedical, food and cosmetics industries.

Andy is also engaged in the creation of nanoscale materials for the colorimetric/fluorimetric detection of bacteria, with the aim of increasing the speed and selectivity of diagnosis of bacterial infections.

Andy has contributed a chapter on the Properties of aliphatic hydrocarbons to the textbook “Pharmaceutical Chemistry”, 2013, Barber & Rostron (Eds), one of the four titles in the OUP Integrated Foundations of Pharmacy series.

Andy has also engaged with the Nuffield Foundation as a provider of Nuffield Research Placements. Since summer 2012, local 6th form students having spent their summer holidays working in his laboratories, gaining an insight into the world of chemistry research and (hopefully!) enthusing them to continue with STEM careers.